Elk are smart. The biggest bulls haven’t become the biggest bulls due to a lack of caution. Increased hunting pressure has given wily bulls a PhD in survival, and unless the stars align, an approaching bull’s “spidey senses” will quickly cause a reversion in course. When calling elk, more things can go wrong than right. The odds are already stacked against the hunter.

It’s important for a hunter to ace the stalk and the final setup. Even with good calling and raging hormones, a poor setup can lead to a bull who wants to come in but hangs up just out of bow range. Here are five ways to make an approaching bull come the final few yards.

Make Him Find You

At times, a rutting bull will haphazardly crash into the location where he heard a bugle or a cow call, but more times than not they like to have visual confirmation of the source of a call. Novice hunters will often set up on the edge of a meadow or opening so they have a clear shot if the elk approaches. Instead, a bull will step into the other side of the meadow and abandon his approach when he can’t see an elk where an elk should be: the location of the call.

After locating a bull and closing the distance, find a good place to setup before trying to call the bull in close. Rather than setting up in a spot where your location can be seen from a long way away, setup in a place that’s out of view unless the bull comes into shooting range. Setup behind undulating terrain or 50 yards into shadowy dark timber so the bull is forced to come closer to be able to confirm your position.

Use Cover as a Backstop

Hunters that use cover to their advantage may need to rethink their positioning. While vegetation and topography can greatly aid a hunter, they can drastically complicate things as well. Hunters will often stand behind bushes or trees to hide from an approaching bull. While the elk likely won’t see you, branches and leaves may also hinder your mobility and arrow flight.

Instead, hunters should stand in front of vegetation. Your camouflage will break up your outline with the vegetation behind you and allow you more freedom to move or change shot angles. While the elk will see you if you move, remain still, and wait to draw your bow until he moves behind a bush or a tree. If you make your moves wisely, he’ll never see you.

Elk have an amazing ability to pinpoint sound. Bulls can easily hear a single cow call or a lone bugle and walk within feet of the call’s location. An approaching bull will normally stop prior to reaching a call’s location to confirm that an elk and not a human made the sound.

Hunters that hunt in pairs can use this to their advantage. After closing on a bull and before challenging him with a bugle, hunters should designate a caller and a shooter. The shooter should position themselves in between the caller and the likely route the bull will take to find the caller. If hunting in more open country, the shooter could remain on the edge of the opening while the caller backs up 50 – 75 yards and ducks behind cover. If all works according to plan, the elk will look for the caller and walk right past the shooter.

Partnering with their eyesight, an approaching bulls will often use his nose to confirm the source of a call. Elk know their strengths. Rather than coming in directly to a call, bulls like to circle downwind before approaching a call. Once they’re downwind, the show is over. 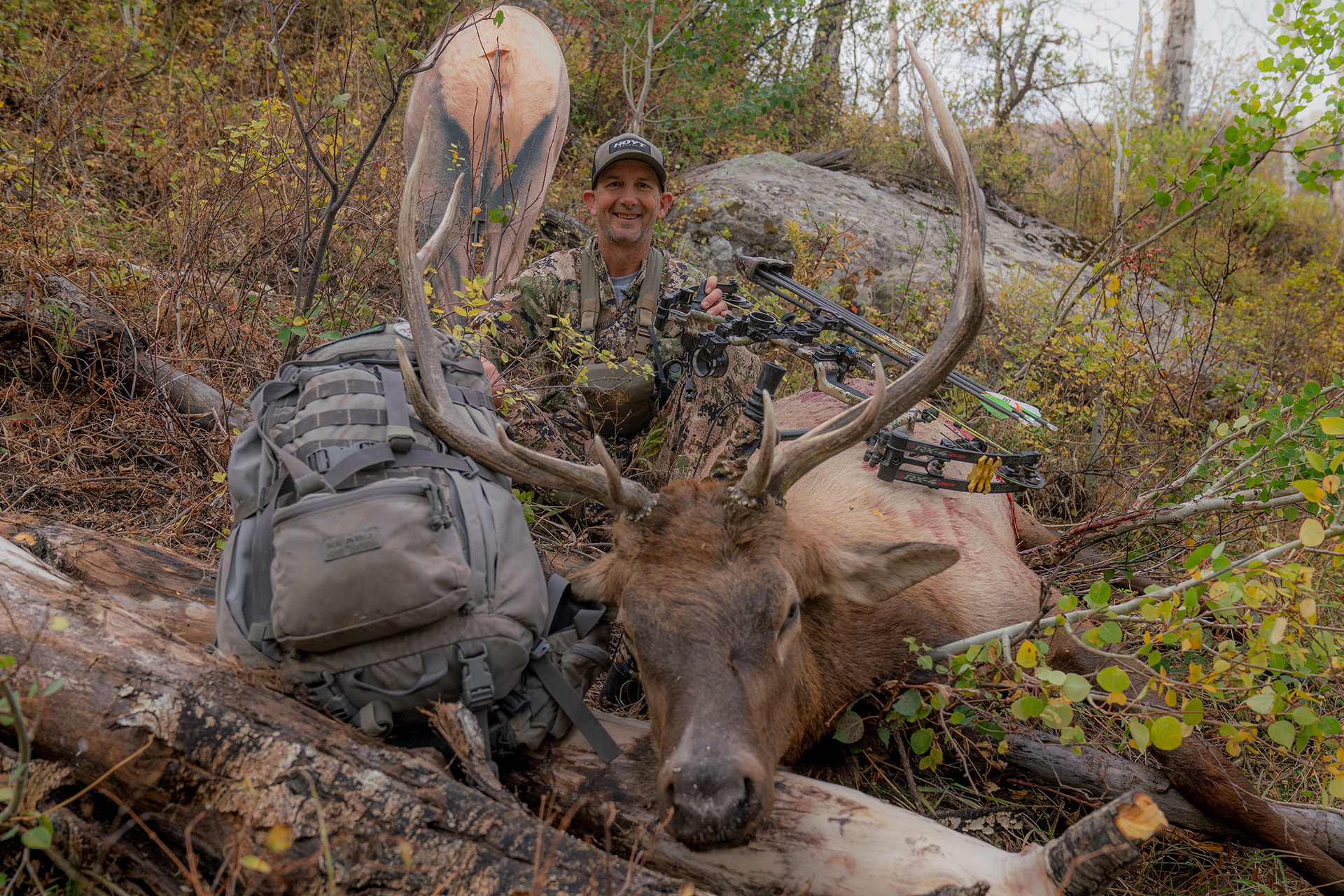 Place the decoy where it's visible enough so it can be seen, but hidden enough where it can’t be seen from distance.

If calling to an elk with a crosswind, beat the bull at his own game. Instead of setting up directly between the caller and the bull, move 15 – 20 yards downwind. If the bull approaches from straight on, you’ll still be close enough for a shot. If he circles downwind to try to catch a whiff, he’ll land right in your lap.

While decoys have wide applications, hunters that trek alone may find one particularly handy. Solo hunters should place the decoy in the same general location where a calling partner would stand. Place the decoy in a location where its view is partially obstructed – visible enough so it can be seen but hidden enough where it can’t be seen from distance.

If you choose to leave the decoy and move closer to the bull, turn away from the bull when making calls – simulating the calls coming behind you from the decoy’s location. While this tactic isn’t as realistic as a caller behind a shooter, the extra boost might be enough for a raging bull to take one step too many.

Small nuances in an archery hunter’s setup can have a large impact in their success. Each of these tricks-of-the-trade should be added to the toolbox to increase shot opportunities and weight during the pack out.