You can be successful hunting coyotes anytime, but there are a few factors that are key to increasing your chance at success. In this article, we’ll go over the best time to hunt coyotes and a few pivotal tactics.

Coyotes are opportunistic predators. They prey on nearly anything that’s accessible – rabbits, squirrels, turkeys, fawns, and even calves and other livestock. This is damaging to game and livestock populations, wildlife management, and farming efforts, and makes it difficult for hunters to pursue other game. Chances are you’re either interested in hunting them to reduce the damage they’re causing, or you just simply want to hunt them. Either is a good enough reason.

Coyotes are opportunistic predators, hunting anything they can and harming game and livestock populations.

When is the Best Time to Hunt Coyotes?

Hunting coyotes is the best way to reduce their negative impacts. But when is it best to encounter one? We’ll go over this in a bit. First, let’s ensure you have what you need to hunt coyotes effectively.

The first thing you’ll need is a predator call to capture coyotes’ attention and make it intriguing for them to come into range. An electronic call controlled with a remote that imitates sounds of smaller game animals or other coyotes works best.

You need to have the right gun. A rifle such as a .243, a .223, or a .22-250 will work, especially if you’re hunting in more open terrain. A shotgun is best if hunting in the woods. Check your local hunting laws to determine what’s legal.

A tripod or a bipod to steady your gun is a good idea. Coyote hunting often requires quick set-ups in open terrain and you’ll likely be shooting longer distances when hunting coyotes. A rifle rest to help you steady your gun is critical.

Nighttime is ideal for encountering coyotes because they are typically nocturnal predators. If you plan to hunt coyotes at night, thermal scopes or night vision are excellent options. This equipment is pricey, but it’s worth it if coyote hunting is a priority. Thermal scopes help with animal identification too, so you have greater certainty that what you’re seeing is, indeed, a coyote before pulling the trigger.

When to Hunt Them

You can successfully hunt coyotes at any time during the year, though winter is when you’ll encounter the most activity because cold weather and food scarcity prompt them to move. Furthermore, they’re more apt to move throughout the day during the cold months whereas you may only see them at night or twilight when it’s warmer. A combination of any call can be useful, and a prey-in-distress call is always a good option.Coyotes’ breeding season is January through March, which makes that timeframe an even better opportunity to hunt them in winter. 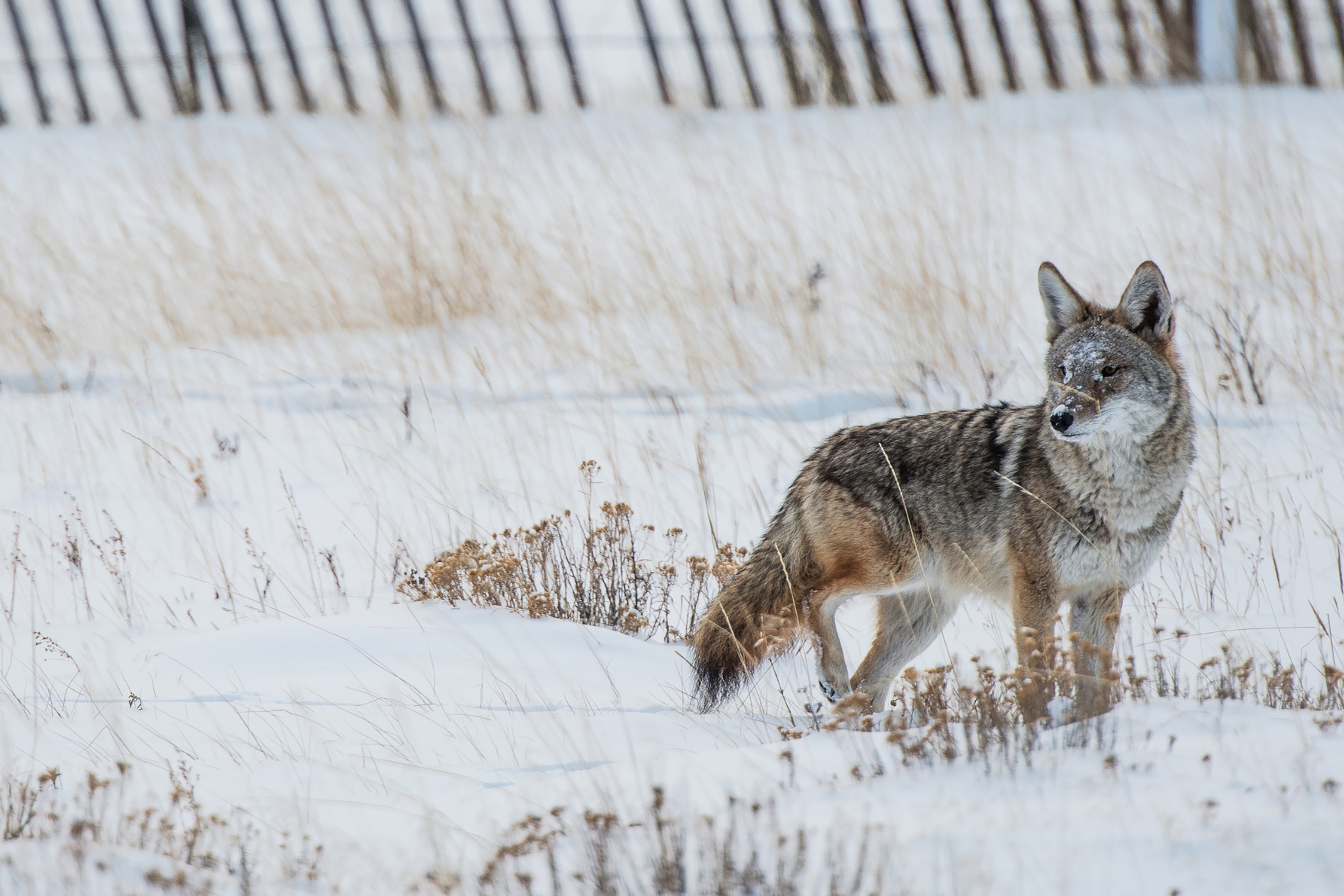 The cold weather will prompt the coyotes to move about during the day in winter months.

You won’t encounter much activity during the spring or summer, though you can get their attention in the spring with coyote calls that mimic howls, yipping, or growling. They are establishing their territory at this time, so acting as a threat to their region can work to your benefit.

As for summer, it’s hot, and they don’t venture far from the den. Try setting up in a pasture with livestock or a hayfield at dawn or dusk. A pup-in-distress call is useful in either of these seasons because pups are still being raised in the den, and the natural protective instincts of a mothering female could prompt her to come investigate the situation, especially if she’s away from the den hunting for food.

Fall is among the best times to hunt coyotes. They’re hungry and on the move looking for something to eat. This is also when pups from the spring litter are now out on their own. They’re young and naive, making them susceptible to respond to any call. Try using prey-in-distress or coyote imitation calls during the fall.

There’s often talk about moon phases and their impact on coyote hunting. You can kill a coyote during any moon phase. However, hunting them in daylight during a full moon might be more challenging because they are likely pursuing prey at night and sleeping all day. So you may either get the best of their curiosity during the day or just consider hunting them at night if the law permits.

Always check local hunting laws before pursuing any animal. While coyote season is typically open year-round, it never hurts to confirm this online or by calling your local fish and game office.

Coyote hunting is thrilling and a crucial predator management tool. There’s never a bad time to hunt coyotes for these reasons. Next time you hunt them, be strategic about when you go and implement these calling tactics to increase your chance of success.