September in the elk woods is a magical time. The mountain air fills with cooling winds and thundering bugles while snow begins to fall on the peaks. Testosterone-loaded bulls crash up and down mountain slopes building a harem and closely guarding them, risking their lives daily for glory and the honor to mate. This is an archery hunter’s paradise.

It’s normal for first timers to feel a little intimidated by the challenge. However, with a little homework and an extra dose of gumption, anyone can experience the hustle and bustle of September in the high country. Below are some FAQs every beginner will want to know about.

Where Should I Go?

Some states require hunters to acquire their tag through an annual drawing. Others allow hunters to buy their tag over the counter (OTC). Generally speaking, drawn tags are higher quality hunts with fewer hunters in the field.

While exceptions exist, hunters interested in a top-tier hunt should study and enter a state’s drawing. Others who want a backup plan or just want to go hunting should consider an OTC tag in Colorado, Idaho, or Oregon. Other states, like Washington and Utah offer OTC tags. But outside of the Big Three mentioned above, most states put restrictions on their OTC licenses. Make sure to thoroughly study the states’ OTC process several months prior to leaving for the hunt.

Another decision a hunter needs to make is if they want to hire a guide or hunt on their own. Beginners should strongly consider hiring a guide. The learning curve causes success rates to hover around 10%, and that’s including experienced hunters who skew the success rate higher. 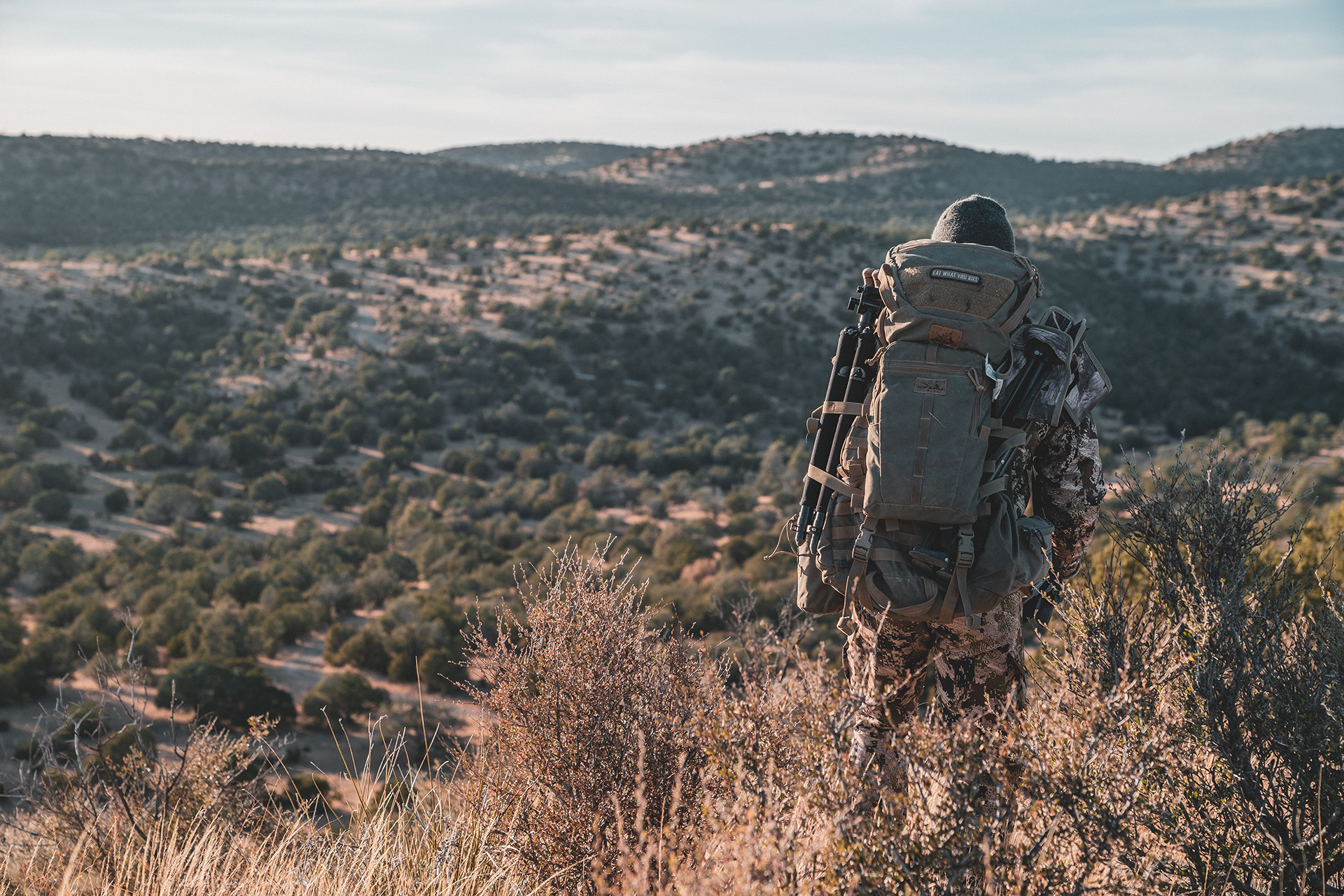 Learn the fundamentals of bow hunting elk to hopefully experience the adventure of a lifetime.

Beginner elk hunters should statistically expect about a 5% chance of success when hunting DIY. While not cheap, an average guide could be hired for around $4,000-$7,000. If you’re looking for a hunt of a lifetime experience, it might make sense to save for an extra year or two and do it right rather than cutting corners.

What Gear Do I Need?

Bow hunting elk requires specific gear, which largely depends on the style of hunting you choose. A DIY backpack hunt will require much more gear than a guided hunt out of a hotel or lodge.

From a starting point, every hunt will require a weapon, a good pair of boots, and a pack. Bow hunting elk hunting can require a lot of walking, making broken-in boots a necessity. Likewise, a backpack with an exterior meat shelf can make a pack out much more convenient.

Good binoculars can also be critical. Game bags are also strongly recommended in case of success. For backpack hunts, camping equipment, food, and water filtration are also necessary. A vehicle with 4WD is also a good idea since public land roads are commonly rough and poorly maintained and can be especially dodgy with rain or snow.

How Do I Find Elk?

Once a hunter has selected a state, an area within that state, and a style of hunting, they should become familiar with the landscape. Bull elk will drastically vary their range over the course of the rut. During the pre-rut (first week or two of September), bulls will form bachelor herds at the highest elevations and graze in preparation of the rut. As the rut begins a week or so before the fall equinox (mid-September), bulls will separate and move lower to begin forming a harem. During the peak rut (last two weeks of September), if you find the cows, you’ll be close to the bulls as aggressive males vie for the right to breed.

Glassing and bugling are the two most common methods for locating elk. Hunters should find vantage points where they can see over vast distances and be prepared to glass for a few hours at daylight and before dusk to find elk moving from feed sources to bedding areas. During the rut, the herd will stay on their feet most of the day as the herd bull attempts to defend against intruders. Bugling will help locate these herds and satellite bulls to know which direction to start hunting.

How Do I Get Close Enough For a Bow?

Once a bull is located, a hunter must close the distance. An elk’s primary defense is its nose, and thermal drafts will ruin a stalk. Make sure you are approaching an elk with the wind in your face and accounting for the time of day and the shifting of wind. In the morning when the air is cool, the wind will blow downhill as cold air sinks. As the sun rises and the mountains warm, the wind will switch and begin blowing uphill as warmer air rises. The setting sun brings on sinking air once again. 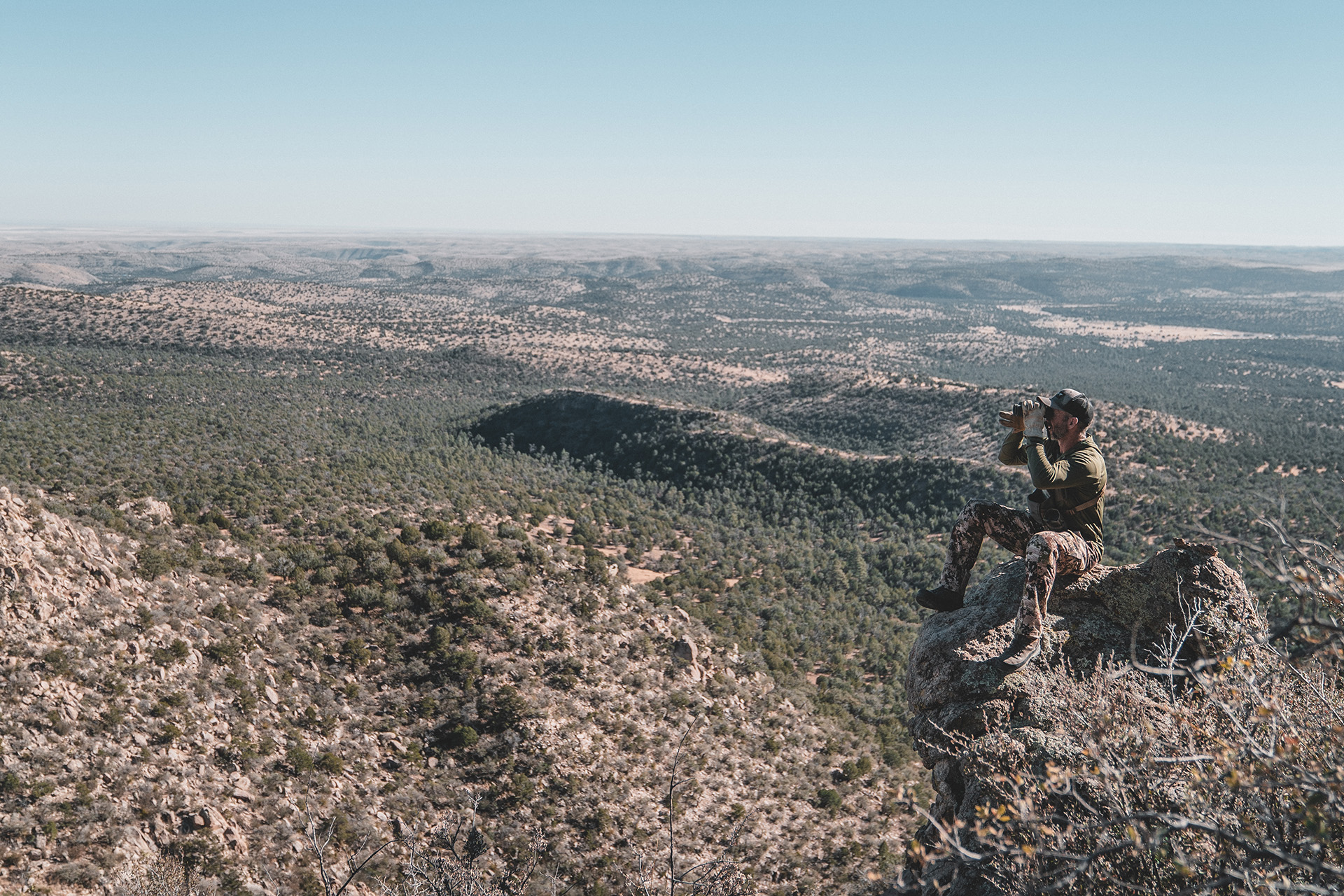 Hunters should find vantage points where they can see over vast distances and glass at daylight and dusk.

The perfect stalk requires some calling. While it is possible to silently stalk into bow range, it is much more common to get close to a herd and call the bull into view. Short location bugles will highlight where a bull is positioned. Once a bull is found, a hunter should then move uphill or downhill to find a favorable wind and then approach the bull. Once the hunter is within 200 yards, a challenge bugle paired with cow calls, giving the impression that a rival bull has moved in and stolen some cows. If the setup is right, the herd bull will come closer to run off the invading bull (the hunter) and recover his cows that have wandered off and present the hunter with a shot opportunity.

What If I Get One?

While putting it all together requires the stars to align, finding and shooting an elk are only the beginning of the hard work. Before leaving for a hunt, a hunter or their guide should be familiar with proper field care. A harvested elk should be quartered and placed into game bags and then packed out to a cooler. A full elk requires roughly six pack loads to move it from the field to the truck. If two hunters are together, each one would make three trips. If three hunters are together, each one would make two trips – and so on.

In between pack-outs, meat should be hung in trees, out of reach for predators. A good practice is to hang meat away from the carcass to lower the risk of wandering onto an unwelcome guest when you return for subsequent loads. Lastly, meat processors in most towns will process the meat and ship it home – usually for just a few hundred dollars.

Bow hunting elk, and especially harvesting one, is truly a lifetime accomplishment. With enough planning and research, additional adventures can certainly be found.