I have a stack of old Field & Stream magazines on a bookshelf. It’s heartening to flip through the articles. In between the ads touting today’s latest products meant to deter scent is the same content that’s filled the editorial pages for countless falls. For example, in bold lettering on the November 1972 issue you’ll see, “How to Rattle Up Big Bucks!” plastered on the cover. I bet you can walk into any supermarket today and find the same headline in one of the many hunting magazines.

But no matter how repetitive the magazine topics may be, I love that there’s still some magic left in the woods. The puzzle hasn’t been solved. The rut is summed up by anecdotal stories, not scientific research. Despite the debate on hunting pressure, moon phases and doe-to-buck ratios, one thread seems constant in all the articles: Anything can happen. 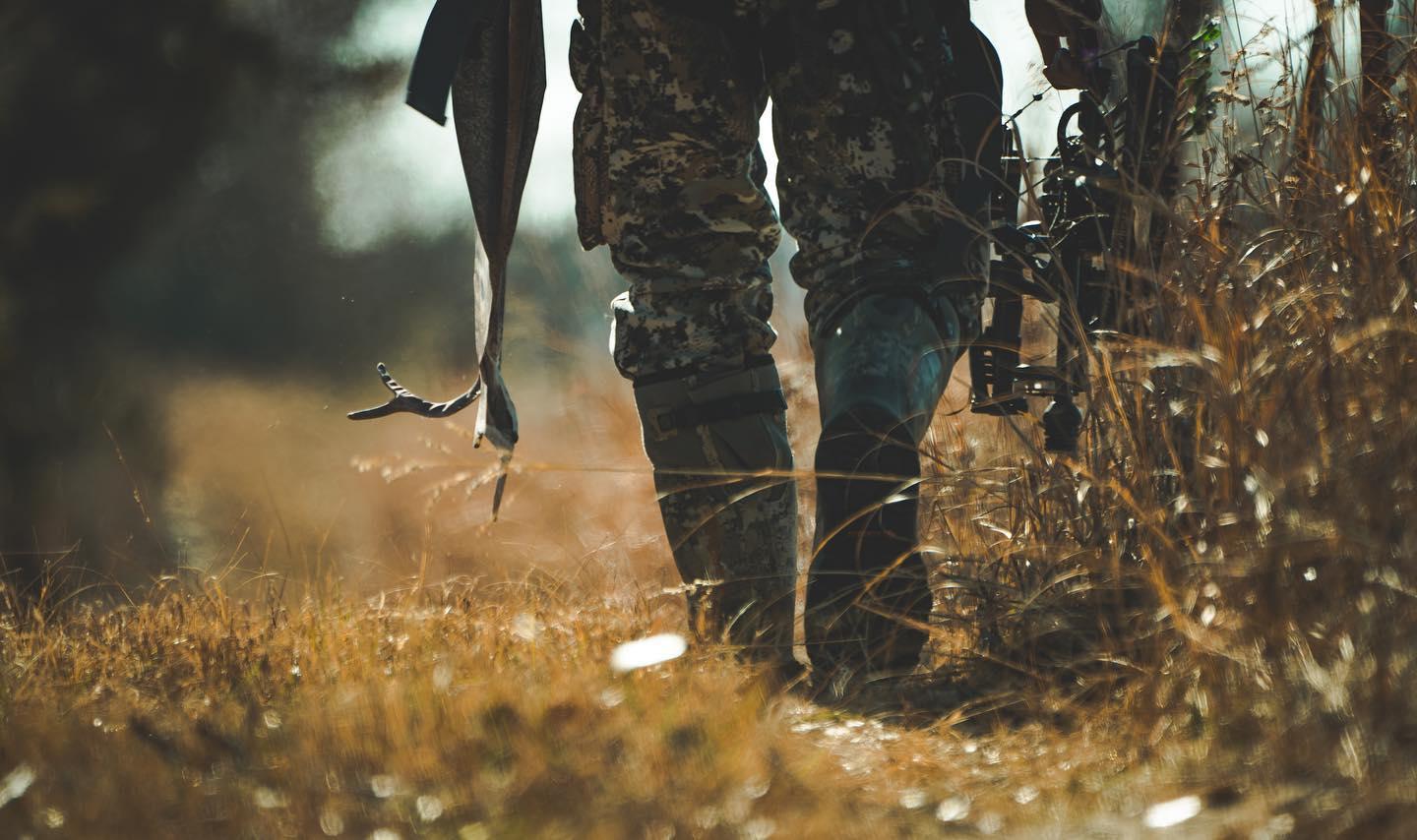 Using deer decoys during the rut is a great way to enliven the action.

So yeah, although thoroughly studied, the whitetail rut is a mystery to many hunters and wildlife biologists. And everyone is free to shout their theories from the deer stand rooftops. What we can agree on is that an old buck will be most vulnerable during this period. How and when he drops his guard may vary wildly, but he’s likely to do it at some point. That’s what keeps us going back out there.

It seems every new magazine I pick up has a new phase of the rut. I even invented one a couple years ago. It’s what I call “the waterhole phase.” Where I hunt, there’s a period in early November when the bucks start showing up at the small ponds with regularity each morning. Their tongues are hanging out and they are breathing heavily. You can tell they are on the chase.

After researching in countless magazines and books, I have identified five distinct phases that most of the deer hunting community will probably agree exist during the rut. They might call them something different or argue when they occur, but the observed whitetail behavior is mainly the same. Deer decoys can tilt the table in your favor in each of them.

The games are over. Territories have been clearly marked with scrapes and rubs and the friendly sparring matches of the early season have become a little more chippy. Bucks are still following a bed-to-food pattern, but are tending to and making new scrapes daily. They are staying out a little later in the morning and are very in tune with the comings and goings of their core areas. When you start finding big, fresh scrapes - the kind that are the size of a Volkswagen - that’s your cue to get the buck decoy out.

During this phase there’s a very fine line between being too close to a buck’s core area and too far away. Too close and the hunt ends before it even starts. Too far and the buck sees your decoy as less of a threat. On a morning when you think cooler weather and a lack of moonlight will keep a buck out later than usual, slip close to the signs he’s left to mark his territory and stake Archer's Choice Plot Pack decoys 20 yards upwind of your stand or blind and facing toward you. 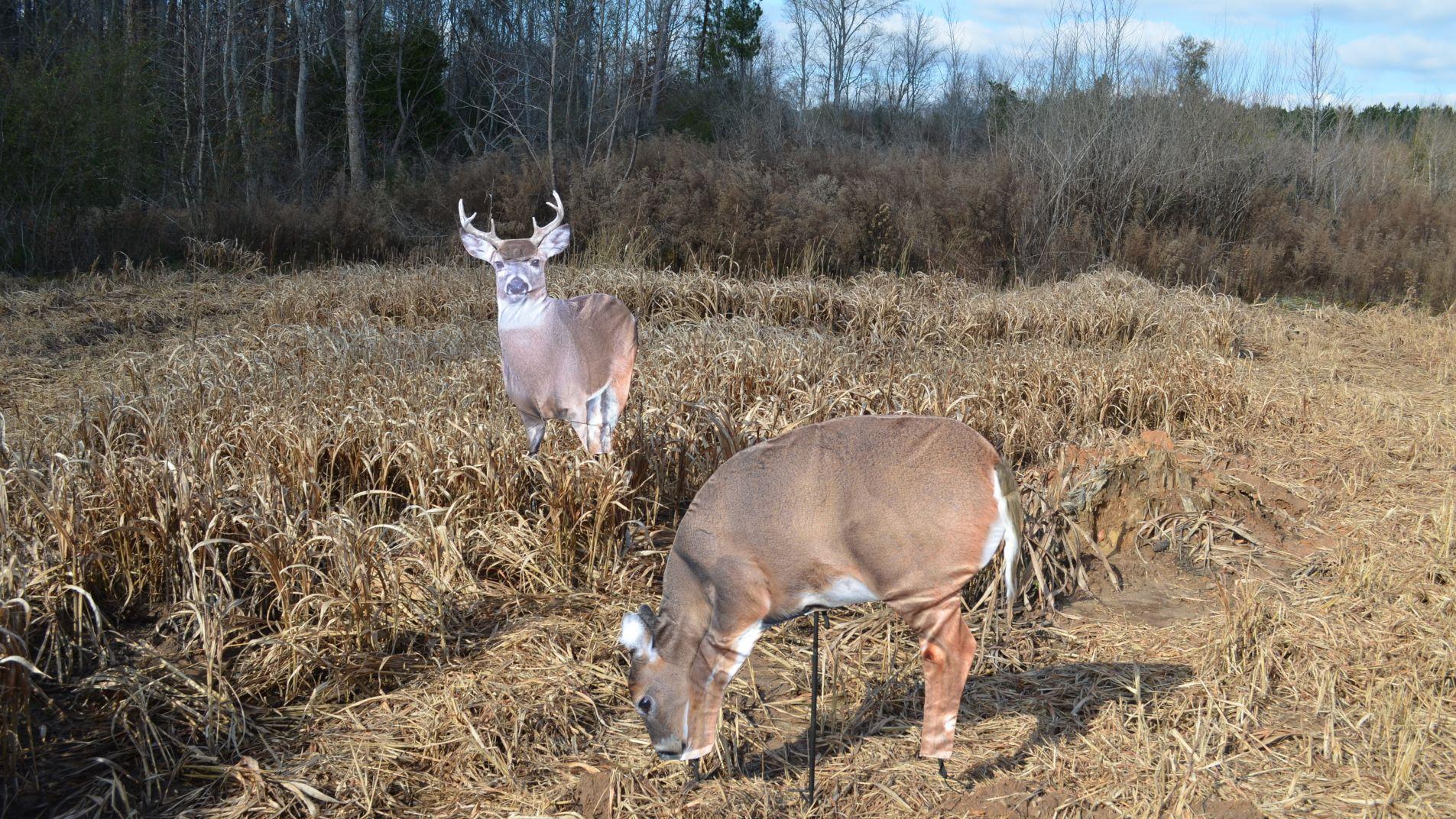 During the peak of the rut, deer decoys like the Archer's Choice Plot Pack can draw bucks close.

When the buck gets home, he’ll see this young punk with a doe (use calls to get his attention), bristle up and likely circle between you and the decoy. Be sure to take the first shot opportunity you have, because if you wait too long, the buck will lower his antlers, charge the decoy and find out it’s all a farce.

The seeking phase is arguably the best time to use a deer decoy. It occurs when bucks are rearing to go, but the does are not yet receptive. It’s a frustrating time to be a buck. Both a buck or doe decoy will pique a buck's curiosity during this phase. In fact, you may want to carry Archer's Choice Plot Pack and Estrus Betty (luckily, our deer decoys weigh ounces and fold up to a size of a small dinner plate). Take cues from the buck’s behavior to dictate which decoy or combination is best.

This period may last up to two weeks and becomes more intense as it progresses. In the beginning, it’s likely you will find success when rattling and using a buck decoy. Once you start to see bucks paying more mind to does instead of their racked competition, use Dreamy Doe and doe-in-estrus scent around food sources. At the very end of this phase, use The Freshman and Estrus Betty combo. The sight of a lesser buck (The Freshman) guarding a doe-in-estrus (Estrus Betty), will cause a mature buck to come unglued as he thinks a subdominant buck is breeding before he does.

It might get eerily quiet in the woods during the tending phase. Whisperings of “the lockdown” are heard from frustrated hunters at the local breakfast diner. The doe is controlling buck movement as she allows a lucky buck to shadow and breed her. For 48 to 72 hours, the buck will not leave her side. While most of this time is spent bedded down, a hot doe might visit a food source, dragging a buck behind her.

Your best bet is to hunt doe-group areas. Get close to the doe bedding areas and set up a dreamy doe in a bedded pose with The Freshman guarding it. This is the time of year when the stories about bucks fighting to near death are set. Be patient and hunt through the all day as you wait for an egotistical buck to challenge your buck decoy for the right to breed the bedded-down doe decoy.

After the lockdown phase, it’s officially the post-rut, but some does may still be receptive. A buck will travel far and wide to find one. If you are seeing bucks harassing does, you know they’re still on the prowl. Hunt major funnels connecting bedding areas and food sources, and stake the provocative Estrus Betty 20 yards from your stand. A doe not tended by another buck while displaying a willingness to breed will get the best of a buck’s curiosity.

Twenty eight days after the tending phase, fawns and unbred does will come into estrus. Mature bucks that have been around the block a few times know this and will be waiting and playing the odds. It’s likely they will be scent-checking as many doe bedding areas as possible, hoping to get a whiff of estrus during the day. Focus on hunting the trails connecting these bedding areas, and set the scene with the same setup you used during the tending phase, a bedded Dreamy Doe and The Freshman decoy.

Above all else, let what you, and not what the calendars or magazines say, be your guide to using the right deer decoy setups during the rut.