Coyotes are sly and sneaky from birth, making them tough creatures to hunt. A hunter’s success hinges on an eternal awareness of the wind direction, attention to camo pattern in relation to the landscape, and the tools employed. Of course, patience helps too. Then, when all of those things fall into place, and a coyote closes the distance on your hunting decoy, the anticipation of a clear shot is a feeling unlike any other.

Do it yourself coyote hunts can be challenging yet rewarding when your efforts pay off. With the use of decoys and modern calls, anyone can find an excuse to head afield with hopes of adding skins to the barn wall or a piece of clothing to your closet.

No matter your tactics, it’s important to remember that the keys to killing more coyotes are mimicking the calls of injured prey and a good set of decoys.

How to Find Coyotes

Coyotes inhabit a variety of landscapes, including suburban areas, and of course, the expansive woods, but there has been a noticeable population increase in agricultural areas. First things first, take some time to scout for coyote sign on your property. Start by searching for scat and tracks. You may even find the remains of a recent kill. Look to large fields and river bottoms, especially areas where rodents, a coyote's main food source, are abundant. Coyotes like to communicate with one another, so keep a howler call on you at all times just to see if one answers. And if you’re going to carry a call, might as well have a rifle on your shoulder and decoy in your pocket. Check out this sample of a coyote howl.

Embrace the challenge.“Coyote hunting presents a different kind of challenge and is completely different from other hunts,” said Dusty Chrisman, an avid coyote hunter. “It’s also a great way to stay outdoors when other seasons have died down.”

Anyone that consistently hunts predators has experienced stubborn coyotes. Just as a deer or turkey hunter doesn’t score on every outing, you can expect it to be much the same with coyotes.

“Often times, coyotes just won’t come in,” Chrisman said. “They’ll just sit there, out of range and bark like a stubborn puppy. Although this can be frustrating, I think it's fun to try and figure out what they’re thinking. That’s when decoys really become helpful to bring them in range.”

This is really dependent on what’s in your gun safe. Because hunting coyote means trekking through sprawling landscapes, that means you’re going to shoot at long distances. Choose a rifle with a 50-200-yard range for this kind of predator. There are some hunters who would prefer to use a shorter range like a shotgun, handgun or bow, but realistically, the evasive coyote requires a firearm that can reach from long distances.

Set Up Your Decoy

Coyotes have likely heard many distress calls. But even if the dog is leery, it will still be likely to investigate. Call for 10-20 minutes, then pause. Pressured coyotes will find a vantage point and remain hidden while they search for what’s making the sound, which is where using a coyote hunting decoy comes in handy. The best predator decoys pair well with calling to grab their attention and hold it while you setup for a shot. If you’re using electronic calls, set up your decoy next to your call and conceal yourself 50 to 75 yards away in order to reduce the likelihood of being spotted.

Using the all-new Song Dog Coyote Decoy, whether you're on the western plains or in the southeastern hardwoods, will give you more chances at nature's toughest target. Add in some yips and howling to give coyotes within earshot the impression that others are inspecting your spread.

During the spring, male coyotes pair up with a female for breeding purposes. Breeding has more than likely taken place, and momma needs to eat, so locate and set up in these denning areas. Don’t be surprised when two dogs come running to your calls - the female will often lag behind the male. Also important to remember is that most whitetails give birth to fawns late April into May. The coyote’s diets are said to switch to a predominantly fawn diet during this time. So using the Song Dog will give the impression of a competitor in the area.

The decoys provide the assurance that what they hear is real. As with most situations, two are better than one. There is a better chance of the coyote spotting at least one of the decoys and it draws their attention as they work their way in.

Work With the Wind and Habitat

As we mentioned earlier, coyote habitats vary. So no matter what terrain you end up in - rolling dairy hills, grasslands, or wooded river beds - always remember to set up across fields or open areas to give yourself the best view possible. Call into thickets, ditches, or other areas where coyotes may be prowling for their next meal. Be stealthy, silent and stay low when approaching a good spot to set up, because coyotes have a keen eye. 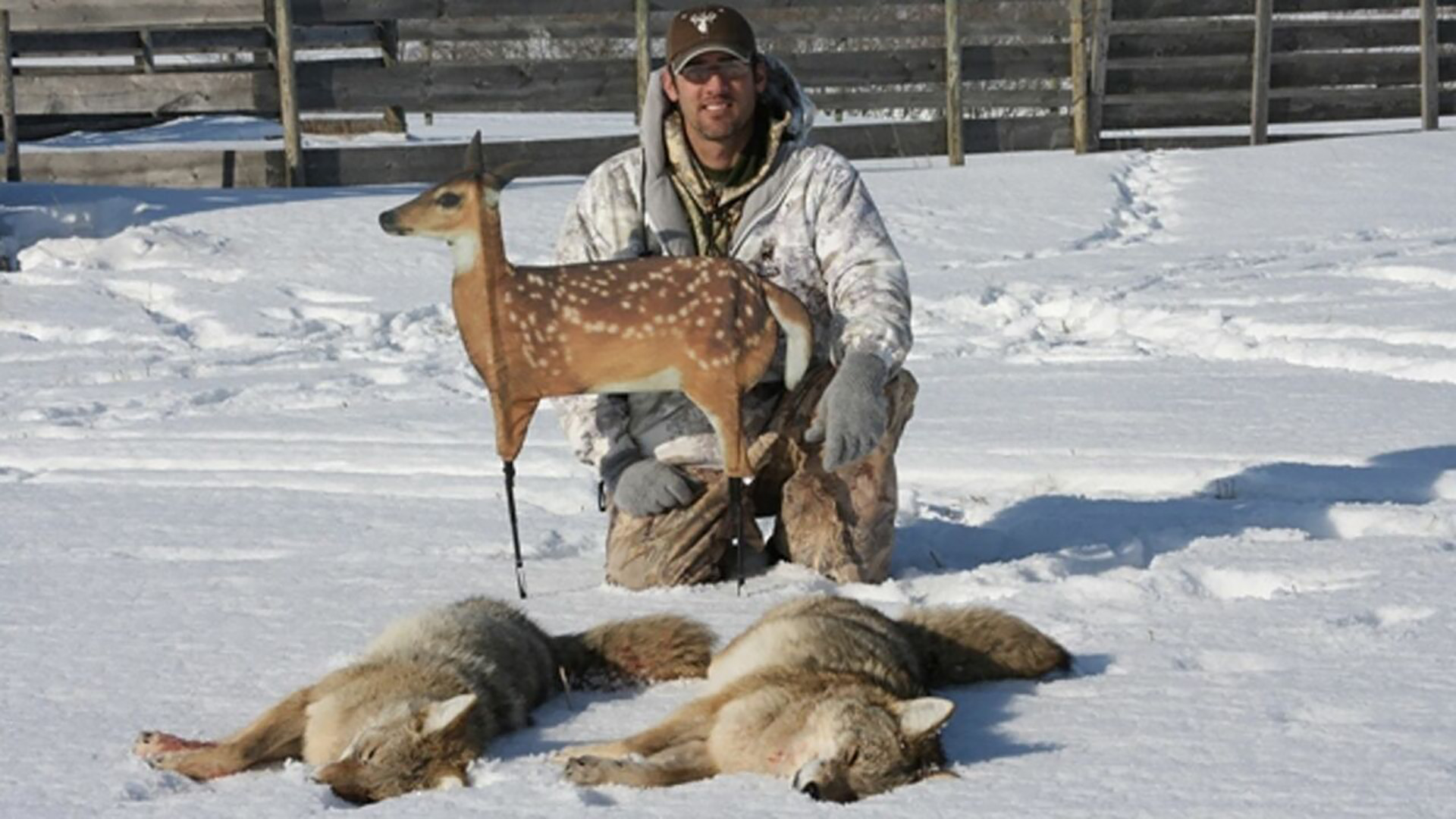 Pay attention to the direction of the wind. It should always be in your face. A challenge of hunting coyotes is wind, especially in the west where it’s likely to blow for days on end. Swirling winds that carry human scent all across the prairies will only make the dogs more cautious and unresponsive. Don’t give up on days like this, though. You never know when a coyote will present itself. Just be ready to make quick, long-range shots.

If your state laws allow both nighttime hunting and the use of a spotlight, this can be an effective way to kill coyotes. A major advantage to hunting them at night is that they are mostly nocturnal, meaning they are most active after the sun goes down. Unlike hunting during the day, which can be slow at times, nighttime hunting for coyotes can be fast-paced while giving you the opportunity to see more animals in the field.

Use a light with a range of at least several hundred yards. As you’re scanning the darkness with a light, the coyote’s eyes will emit a bright reflection that’s easy to see, but do check twice that it’s a coyote before you start shooting. A predator’s eyes are typically brighter than a deer’s, but there are always variances.

Coyotes can see and smell really well. Wear scent-free camo from head to toe, including a face mask and gloves. Once you’re set up, only allow your eyes to move, scanning the landscape, until it’s time to shoot or leave.

During the spring, coyotes switch their diets almost completely to whitetail fawns. This year for National Fawn Awareness Season, let’s all do our part by shooting a few predators that feast on our whitetail fawn population. You never know when you might save the one that becomes the buck of your lifetime.