Sometimes, you don’t know the difference an elk decoy will make until you try it. Melissa Bachman, host of Winchester Deadly Passion, discovered just how important it is to use a visual aid when calling and hunting elk during the rut.

Over the years I’ve done quite a bit of elk hunting, however, decoys have never been a big part of my setup, but after a recent elk trip, that will be forever changed,” said Bachman. 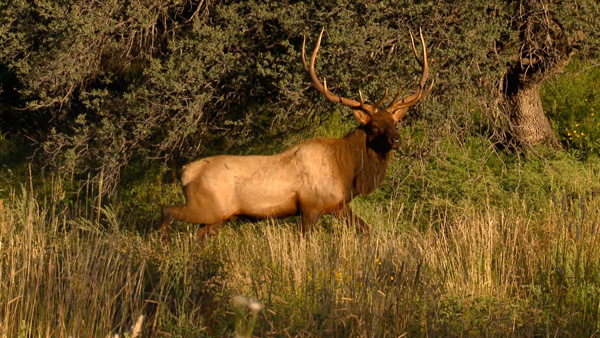 Bachman and her friends were intent on leaving nothing to chance. They wanted to fool all the senses of a mature bull elk with calls, scent and decoys. Even though the conditions were right – peak of the rut, screaming bulls and perfect weather – if an elk hears, sees or smells something that is not right, your chance of shooting him diminishes dramatically, if not completely.

Calling is a huge part of elk hunting, and it only makes sense to try and fool as many senses of a mature bull as possible to ensure they fully commit,” said Bachman.

On this hunt, two hunters of the party were designated callers. They used a wide variety of cow calls and an occasional bugle to sound like a large group of cows and hit the right note to fire up a bull. But elk calls were not the only sounds used to fool the bulls’ ears.

When the guide would bugle, he wouldn’t just bugle and then move on,” Said Bachman. He would run around like a crazed bull racking trees with branches and busting sticks. The movement was the key.”

Adjusting the calling to situation, the guide would call aggressively if a bull was losing interest and pulling back. If a bull was coming in hard, he would move back and call so the bull would be drawn right past the hunters. 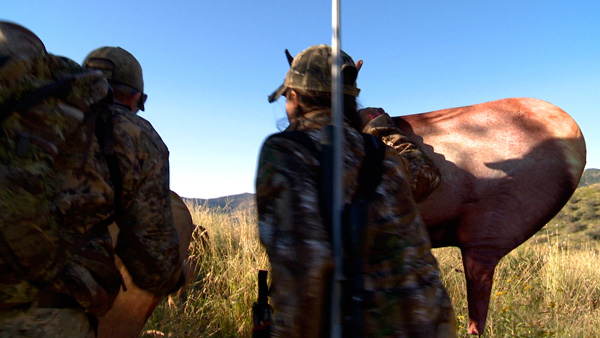 In addition to an elk calling strategy, the hunters used Golden Estrus Elk scent to try and fool a bull’s amazing sense of smell, while also battling the swirling winds. If the winds did swirl, hopefully the bull would smell the phantom cows he thought were making the calls.

We always tried to have the wind to our advantage, but in elk country, winds can swirl,” said Bachman. “When this happens, the bull usually hightails it out of there immediately. With the extra Golden Estrus Elk scent, we were hoping that we could benefit from any possible swirling winds.”

With the elk’s noses and ears being tricked, that only left the eyes. When a bull gets close to the source of a call and sees no cow, he is put on alert and either hangs up or flees. But a cow elk decoy can give him the assurance that the calls he hears are real, and he keeps coming in, focused on the decoy. Because Montana Elk Decoys are so compact, all the hunters carried one in their pack. When a bull got close, whoever was the farthest back from him would set up the decoy. This allowed the bull to move toward the decoy and right by the other hunters.

“I didn’t use [an elk decoy] up front because I didn’t want the bull focused on me,” Said Bachman. “I wanted him looking past me to allow for a good shot. However, I did use my decoy anytime we were trying to cover ground quickly or would run out of terrain. We walked across wide-open clearings without ever being busted thanks to the decoys.”

Bachman’s story is a good lesson for all elk hunters to learn. Sometimes we forget about fooling all the senses and rely too much on calling. You often hear how public land bulls’ lips are sealed, or elk around areas with a high wolf population have close their mouths. They are relying more on their noses and eyesight, so show them what they want to see. If you are not using elk decoys, give it a try and maybe you’ll come to see the advantages they give, like Bachman did:

“I know the elk decoys made the difference, and we found that by combining all of these tactics together, it really improved the hunting and our chances on some of those old mature bulls that can be tough to call in.”

Now that you read about this elk decoy hunt, watch Winchester Deadly Passion on the Sportsman Channel Sunday, July 13 at 2:00 p.m. ET.