The fall leaves have blanketed the forest floor, and the crisp winter cold is spilling into the farmlands and fields of North America. You’ve begun to see more bucks lately, some of which are checking does. So what’s your strategy going into this year’s peak rut?

If you’ve happened to pick up a deer decoy for the pending rut, or are thinking about getting one, here are some tips on how to effectively use them during the peak rut. When it comes to peak rut deer decoy placement, you never know when putting it on a field edge or angling it properly could be the difference in drawing in a buck or not. So, here’s what we’ve found that’s worked for us over the years.

Peak rut is primetime for hunters to take a trophy. Bucks have spent the last several weeks establishing dominance and marking territory by rubbing trees and making scrapes. With that in mind, this is a time when you want to use either a doe decoy, such as Estrus Betty. Or opt for the duo known as Dream Team. Estrus Betty looks like a peeing doe, and no buck can resist checking a peeing doe. Dream Team features a buck-doe decoy combination. These two decoys together make dominant bucks think an inferior deer has moved into his territory.

The idea is that the buck sees the doe (exactly what he’s looking for) and immediately sees competition that he needs to come over and squelch. Not only is this a double whammy of endocrine system triggers for a buck, but you can also just think of it as a double-sized billboard. There’s a lot more to see, so it’s far more likely to catch the eye of a buck from across the field.

Now that you’ve got the right decoys, let's go over how to properly place these to maximize success. 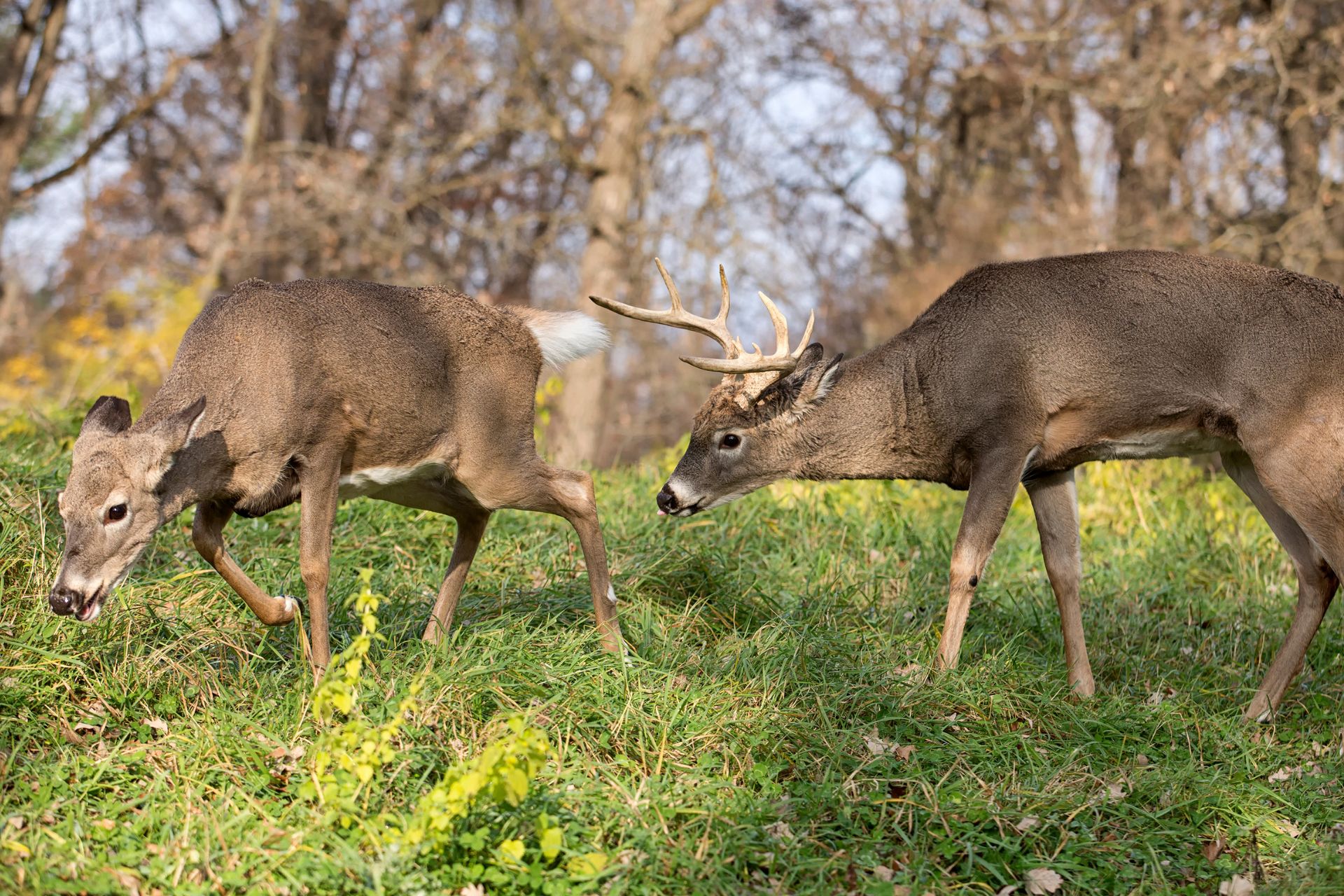 Proper peak rut deer decoy placement can get that big buck within range.

Placing Your Decoys During Peak Rut

By this point in the season, you’ve likely set stands along trails and near food sources on your property. The first thing you need to consider when placing your decoy is keeping it within range of your stand location. The decoy is designed to draw bucks close to investigate. Make sure it is 10-20 yards max and has plenty of space around it.

You want to make sure you have multiple shooting lanes around the decoy that each provide an ethical shot. It might sound silly but consider bending down to the height of a deer to make sure you have an idea of what a deer will be seeing as it looks at your decoy. There is a lot of debate among bow hunters on the direction you want the decoys facing but consider that during peak rut, most bucks will approach a buck decoy head on and a doe decoy from behind.

Keep that in mind during setup so you’ll have multiple broadside shooting lanes. Don't automatically think the decoy needs to always be in front of you. A decoy sometimes works best by just causing deer to come a little closer. So setting it behind or off to the side will make a cruising buck to change his route just enough to give you a shot.

Not only will the decoy provide a visual, it can also be used to draw bucks in with scent. A proper placement will help carry a deer’s scent, like estrus, in the right direction while covering your scent. Be sure to check your states regs on what is legal as far as scent.

The third thing to keep in mind is similar to the second. Make sure the decoy can be seen from a distance, either on the edge of a field or down a long trail connecting bedding and feeding grounds. It might go without saying, but you can think of it like this: the further away your decoy can be seen/smelled, the wider net you are casting for your quarry.

Consider adding a TipUp stand to your decoy. This lets you deploy the decoy when you want it seen or lay it down to hide it when you don't. It also helps keep unwanted deer from hanging around your decoy. Say you attract a smaller buck or some does you have no interest in shooting. If they were to spook for whatever reason, maybe the wind changes, then you're likely not going to draw a mature buck in close while they're stomping and blowing.

A Scent Strategy for the Decoy

Hunters know that a deer’s olfactory abilities are its greatest strength. So it is important to use this to your advantage when adding a decoy to your hunts. This is especially true during peak rut.

First, eliminate your scent from the decoy. We’d suggest spraying it with a scent eliminator once you’ve set it up, but treat it carefully when not in use to keep as much odor as possible off the decoy. Then, you can add Tink’s #69 or some other scent that smells like a doe in heat. Again. check your regs to see what is legal. Using the Teaser Tail allows hunters to give their decoy a more realistic look by creating lifelike movement while casting the scent into the wind. Additionally, not having the scent directly on your decoy will ensure that it will not smell like a doe in heat when you store it during the off-season.

Using a properly placed and scented deer decoy during the peak rut can afford you those essential few extra steps to get that big buck within surefire bow range.