You've probably heard of it by now - a way to get closer to gobblers that are henned up or hung up. It's called reaping. And what we're going to provide, beyond the reaping decoy, are some turkey fan decoy tips that will hopefully help you increase the action this spring.

But did you know that hiding behind a decoy is actually nothing new? Although it’s been trending for the past few years thanks to the connectivity turkey hunters now enjoy on social media and the web, it’s really just being revived from the tactics Native Americans once used.

In fact, the Indians knew the usefulness of decoys and often caped out the head and shoulders of a dead animal, stretched it on a cane hoop, and cured it with smoke. When hunting, the Indian either wore the decoy or carried it in one hand and used mimicking motions and calls to draw his quarry near.

Please don't attempt to reap a turkey on public land. Be absolutely sure that the area you are hunting and using the tail fan decoy is controlled. Do not use it in fields that are visible from the road, where the risk of getting shot by some low-down poacher exists. And definitely don’t use it in areas that allow rifle hunting for turkeys.

On the other hand, if there's a chance you might attempt to stalk a turkey in a privately controlled area, be sure to communicate your plan with your hunting party. Also, be sure to check your state's hunting regulations to make sure it is legal.

There are many situations in which to put a turkey fan decoy plan into play. Maybe you’re just tired of sitting in a blind all day when the action is slow, so you start looking for birds in other fields on the property. Maybe you know where a bird is strutting after the hens leave him to nest.

The only way to kill said bird is to stalk into his territory. Most times though, a stubborn old tom (or two) is raising all kinds of hell in the middle of a wide-open field, but doesn’t care to come see you in the treeline. You’re sure he’s seen your decoys, yet refuses to budge from his post.

Slide the Wiley Tom out of your vest, open it and get ready to have some challenging fun. Take hold of the stalking stake in your off-hand with your shotgun in the other and crawl toward the tom, hiding behind the decoy. If the gobbler commits to you at any time, stop, stake the Wiley Tom into the ground if you can and get ready to give him the business end of your scattergun. 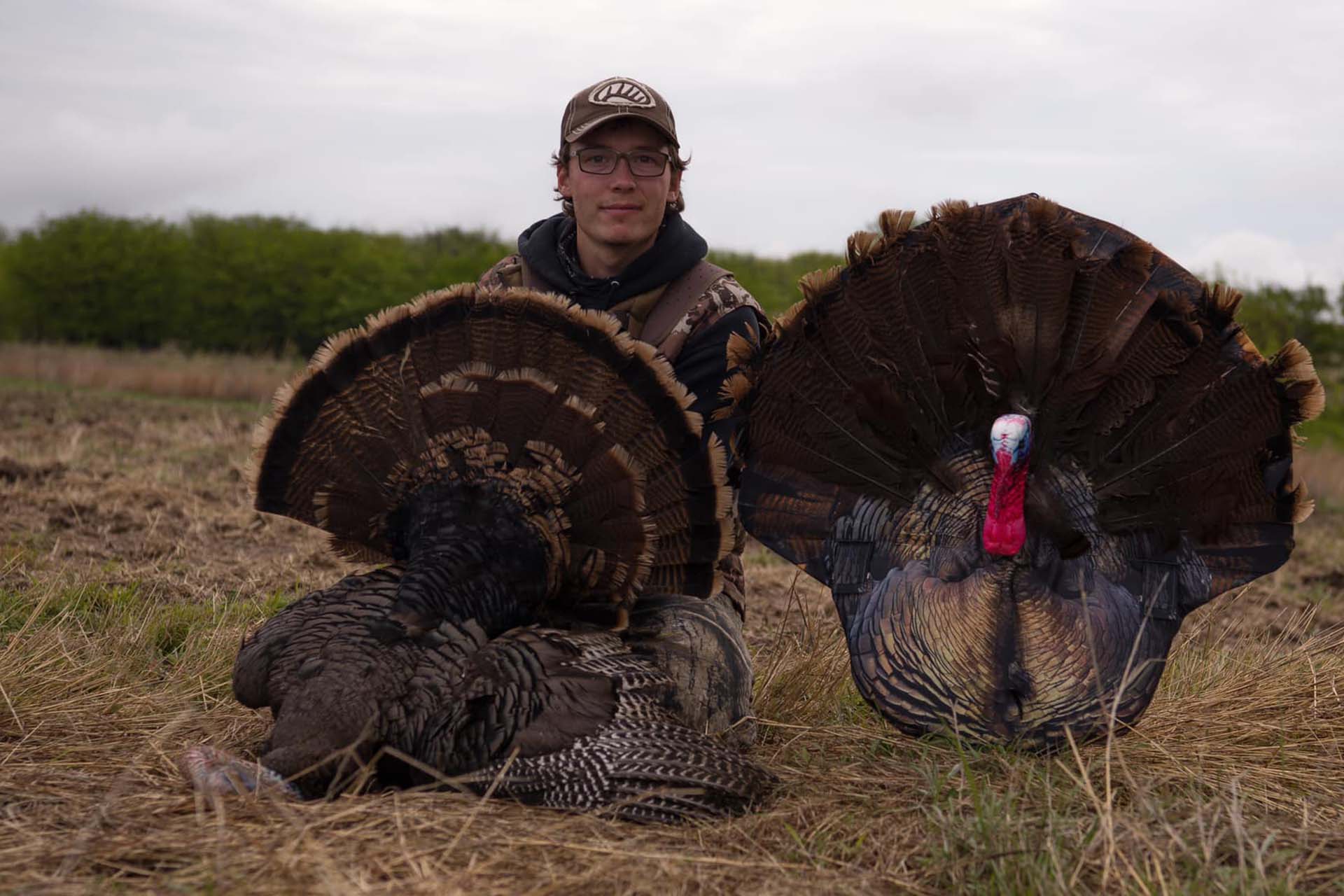 If the gobbler commits to you at any time, stop, stake the Wiley Tom into the ground if you can and get ready to give him the business end of your scattergun.

Real turkey fans are inexpensive and lightweight, but they don’t offer the cover of a full-bodied tom decoy. Life-size 3D gobbler decoys cost more and are bulky. They are not something you want to tote along while crawling. Montana Decoy created the best turkey reaping decoy when we released the Wiley Tom. 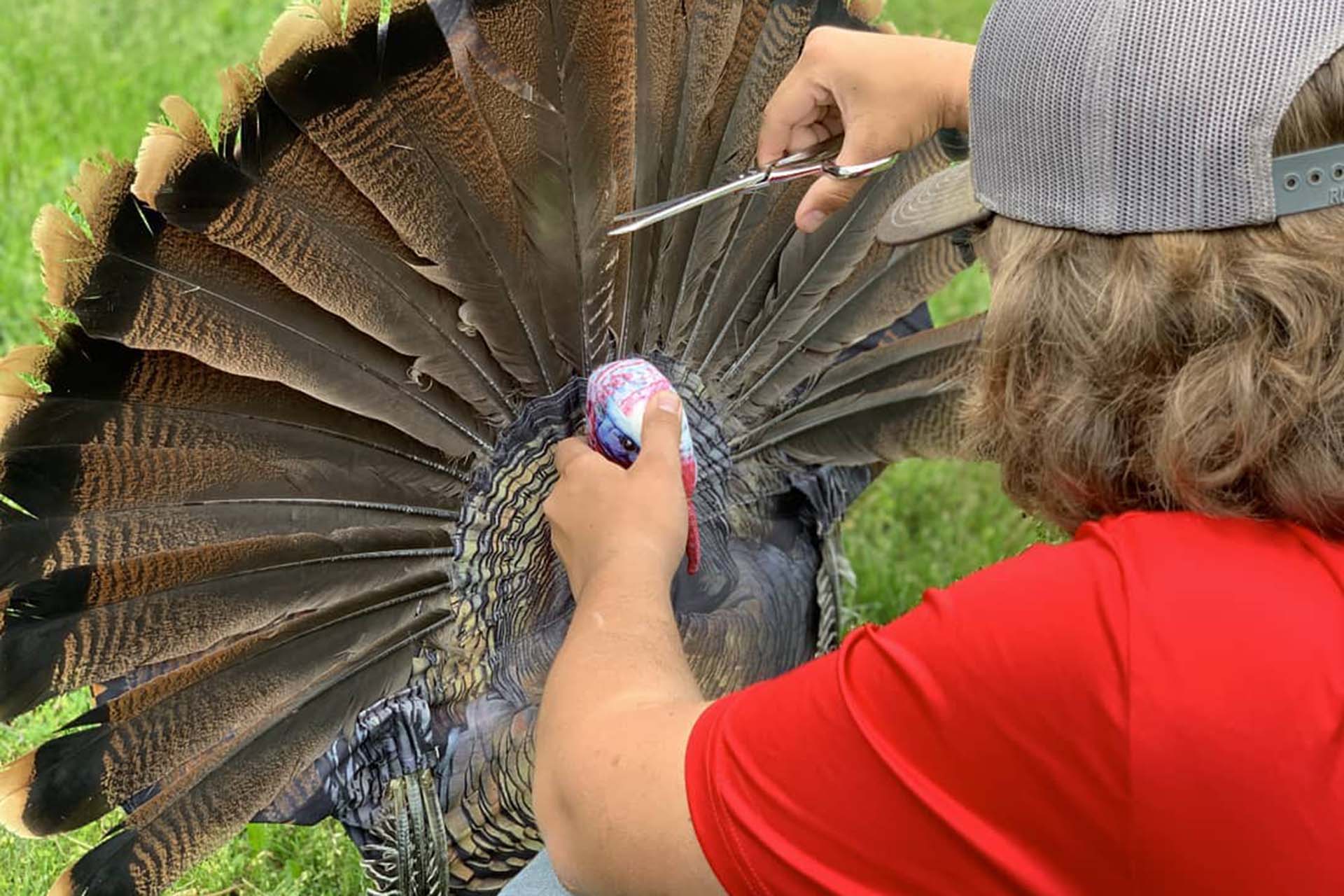 The Wiley Tom 2D turkey decoy is lightweight, packable, and allows you to maximize its realism by adding actual gobbler fan feathers.

The 2D tom decoy offers the same feather-light weight of a turkey fan and its life-like size will conceal most hunters in even the shortest grass. It has a stalking handle for one-handed use and a mesh window so you can see what’s happening ahead. When it’s time to take a shot, stake it in the ground (the stalking handle is also a stake) and give the tom a lead charge to the noggin.

This tactic doesn’t work all the time, but it does have a great success rate on non-responsive gobblers. Once you try it, you will keep a reaping decoy in your vest at all times because there are not many ways more fun to hunt turkey than making something happen behind a decoy.