Pre rut is a favorable time to arrow a trophy buck as they tend to scrapes and rubs, increase their protein intake for the upcoming rut, and even sniff the air a bit more checking for a doe in estrus. Yet, they are still in a fairly predictable pattern as they move from bedding areas to food sources. This is a perfect recipe for using a deer decoy before all hell breaks loose during the rut. Here are some tried-and-true pre rut deer decoy setups. 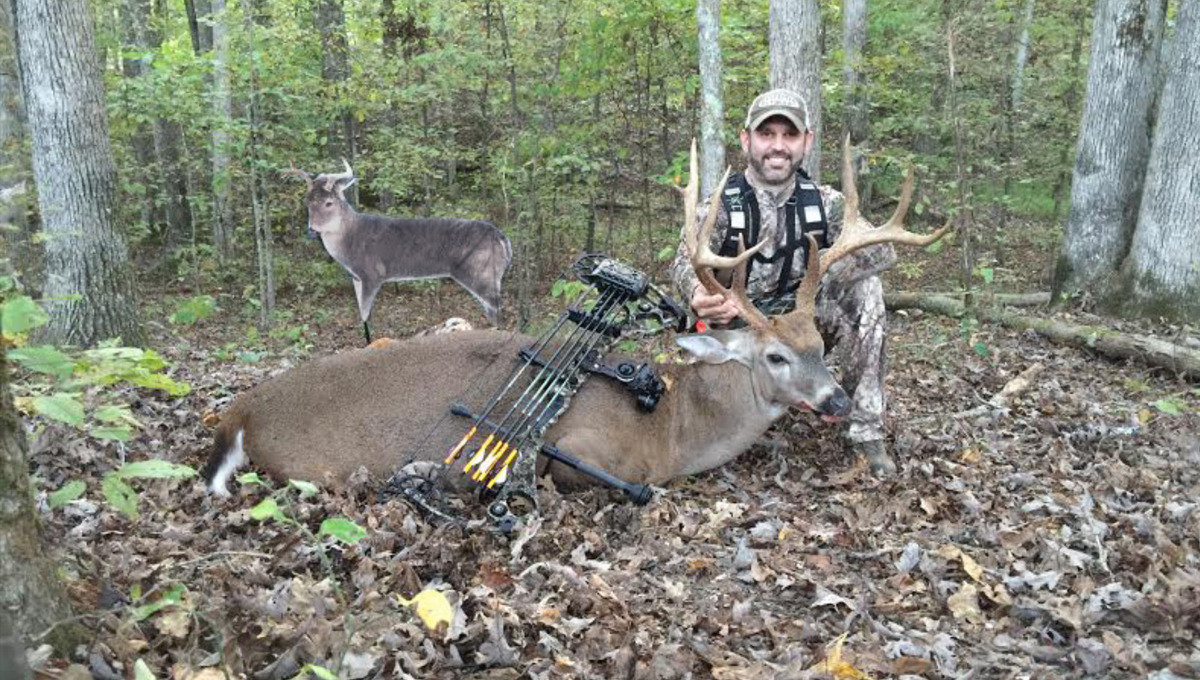 It was still fairly warm in western Tennessee when Brian Godfrey climbed into his stand for an afternoon hunt in early October. Though it was weeks before the rut was to begin, he chose to use The Freshman deer decoy to pique any buck’s attention that had plans to skirt the woods around the food plot he was hunting rather than come in to feed. The field had been planted in brassicas, clover, buckwheat, and corn that had been strip cut. It was sure to be a spot any pre-rut buck would check out as the chase neared.

Godfrey placed his lock-on stand in an island of trees located directly in the middle of the plot and placed The Freshman at a 45-degree angle to his right, 38 yards out and facing his stand. Some might wonder why he’d place the decoy so far away, and that is a good question.

On that day, Godfrey had the wind hitting him directly in the face. He expected any deer that entered the plot to come from his left and didn’t want it circling behind, catching his scent. If all went as planned, a buck would confront The Freshman head on. As most of us know, when bucks are acting aggressively toward each other, their eagerness to fight clouds their judgement.

By 5:00 p.m., neither hide nor hair had had shown itself when Godfrey caught movement in the woods just across the field. At first glance he knew it was a deer, but couldn’t tell much else. He could only see its legs and rear end. When the deer slightly emerged from the treeline he instantly knew it was a buck the landowner had been seeing the previous weeks. He was a borderline shooter, but with it being a warm October day and early in the season, Godfrey decided he would take him if the opportunity presented itself.

“He came on out into the field and would posture up, staring dead at the decoy,” said Godfrey. “Then, he’d just go into full alert mode for about two or three minutes, posture up again, full alert again. This must have gone on for ten minutes.”

To see if he could get him to finally commit, Godfrey slowly reached down to his pack to retrieve his snort call wheeze. He hadn’t been looking down for maybe five or six seconds, and when he looked back up the deer was again on full alert, looking just beyond Godfrey's stand. Suddenly, he blew and ran. But it wasn’t Godfrey’s movement or the deer decoy that caused the buck to beat it.

“I didn’t even have time to utter a word of frustration. Before I knew what was going on, this big boy was making a beeline to The Freshman, and never checked up. I made a noise with my mouth to stop him at 16 yards. Who knows what he would have done to the decoy, but I didn’t want him to get too close and the smell not be right. A Wasp Drone broadhead went through his heart, out his left shoulder and the arrow stuck 10 inches into the dirt.”

When it was all said and done, the big buck hadn’t run more than 60 yards. Had it not been for The Freshman, Godfrey would not likely have even known this buck was in the area.This time of year, a new buck on the scene paired with some rattling and calling, can get a buck to expose himself in a food source before daylight fades.

David Miller hunts Northeastern Illinois and on his property, the doe-to-buck ratio is around 2-to-1.

Fewer bachelorettes intensifies the horseplay during the pre-rut period as bucks sort out dominance. Miller waits for bucks to significantly increase their scraping activity before using his buck decoy. He sets it up right in the middle of an open field so it can be easily seen.

“Some evenings during the early pre-rut, I’ll have three or four different bucks come into the setup,” said Miller. “But as it gets closer to the rut, only bigger deer bristle up and charge in. There seems to be a window of a few days right before the chasing phase begins when a mature buck won’t tolerate any young bucks posturing. I consider this time my best chance of killing a wall hanger.” 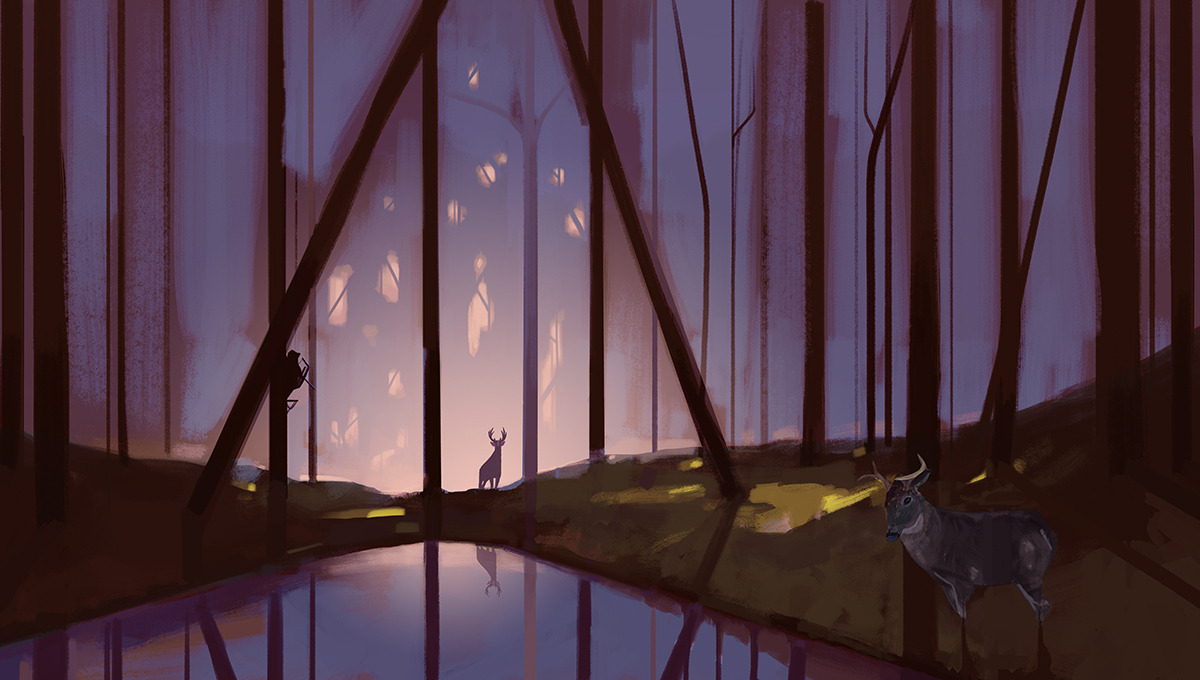 Perhaps the only thing that infuriates a mature buck more than an overconfident young buck showing off in his neck of the woods is one that has the audacity to appear in his core area.

Channeling your inner Navy SEAL to slip into a big buck’s bedroom and take him by surprise might be your best bet to shoot a buck that’s “unhuntable.”

The first step is to pinpoint where your target buck is bedding. Then, pick a tree that’s 200 to 300 yards downwind from the bedding area and that will accommodate your climber. When afternoon conditions are right, slip into the area, set up The Freshman buck decoy 15-20 yards upwind of your stand (perhaps over a scrape or rubline) and quartering towards you. Just before dusk descends, grunt and rattle to let the bedded buck know there are intruders on his turf. When he gets up, he should head right towards the call, see the decoy and step into your shooting lane.

This is not a trial-and-error tactic. It’s more of a “wait for the stars to align” and get it done quickly. The decoy helps set up a shot so you can get in there when the time is right and seal the deal. The hardest part is locating the bedding area. Scout in the summer. Hang trail cameras over perennial scrape and rublines. Put on your rubber boots, Scentblocker clothing, and douse yourself with scent killing spray before walking through creek bottoms and funnels to look for cluster of rubs. Most of all, use your woodsmanship to determine where a buck will lay low when he’s not on his feet. Wait for the perfect wind, moon phase and a cold front to brew before quietly climbing a tree. When it all comes together and that buck is thrashing through the woods to put your buck decoy in its proper place, you’ll quickly realize the effectiveness of using deer decoys during the pre rut.