When you watch the first video below, successfully stalking a rutting antelope with a decoy looks easy. However, what that clip doesn’t show is the previous attempts that resulted in utter failure. The likely pitfalls that will spoil an antelope stalk are sometimes not so apparent, but through trial and error we can at least try to overcome them.

When an antelope buck is surrounded by a bunch of does, getting close becomes infinitely harder. There are simply too many eyeballs to fool. Your goal is to successfully stalk between the herd buck and his harem without being busted. This may take some patience and practice.

In the clip above, the terrain was not suited to monitor the antelope herd. But if you can get to a good vantage point, observe the buck’s behavior as you come up with a plan. Is the dominant buck chasing inferiors away? Is he trying to keep the does together?

A bowhunter’s best opportunity to get into position will be when the buck temporarily leaves the does. If he travels out of sight, get your bow and decoy ready, then set up on the path you assume he will walk back on.

It’s a myth that you only have to beat an antelope’s eyes. While they may not use their noses like a deer or elk, the whole herd will be gone in a flash if they smell you. Keep the wind in your face when stalking. That’s a given, but winds swirl in goat country. Practicing methodical scent control with the proper clothing and scent-killing sprays may momentarily confuse a buck rather than send him into alarm if the wind hits your back. Sometimes all you need is a short window to make a good shot.

Sometimes there’s just no way to sneak in close when the landscape is so open. The Big Red Moo Cow decoy serves as a fantastic piece of cover to get close if you are hunting near cattle. That said, don’t force a stalk if there’s no chance. You are better off moving to greener pastures for another opportunity.

Hindsight is 20/20, but we bet if Montana Decoy founder Jerry McPherson had that stalk (in the video above) to do over, he would opt to use a doe decoy. As luck would have it, the doe decoy was in the truck. The rule-of-thumb is to use a buck decoy on a dominant herd buck and a doe decoy on satellite bucks. Our decoys are so packable and light, there’s no reason not to have one with you at all times.

Flashing the Decoy at the Wrong Time

We’ve seen our antelope decoys draw bucks from over 400 yards away. However, try to get within 100 yards to bring out the dominant traits in an old buck. Also, make sure you’re ready to take a shot. Nock an arrow, range any landmarks so you can choose the right pin and then flash the decoy. When a buck is barreling your way at 55 mph, you’ll be glad you did.

There are a lot of obstacles and challenges to overcome during an antelope hunt. Realistically, you will fail more than you succeed. When you do everything right and get one into bow range, the frustration is replaced by sheer excitement. 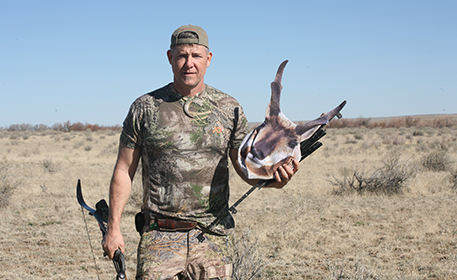