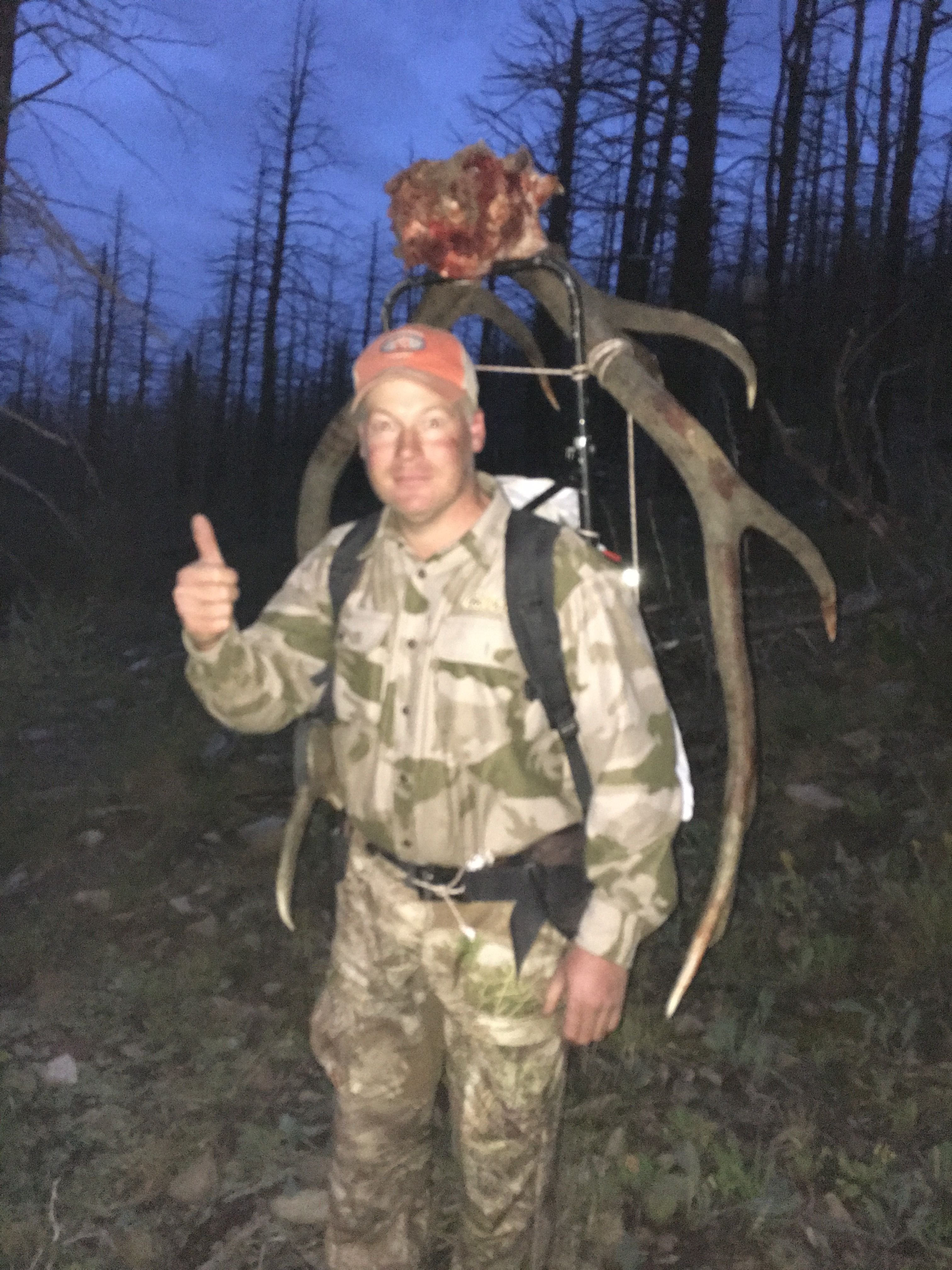 Bowhunting for elk is akin to manual labor. This is true whether you kill an animal and have to pack it out or arrive home meatless (we wouldn’t want to say empty handed because most of us know the equipment required that has to be hauled home). But it’s those certain hunts when luck and skill marry to make the reward worth the toil. You and your hunting buddy are deep in the backcountry, a hot bull bugling down the back of your neck until a perfectly placed arrow sends him deeper into the canyon you dread walking down, much less back up. The adrenaline pumps, high fives all around, photographs. Then the adrenaline dumps and the “Oh, hell” moment arrives with the stark realization that this big dead animal isn’t going to carry itself back to your camp.

Such was the case on a recent hunt in Colorado. Montana Decoy’s president CJ Davis and his good buddy Lang Nickles called home base a drop camp set up by Fulldraw Outfitters where they were left to figure it out for themselves (CJ is a seasoned elk hunter, but we’re always learning, aren’t we?). It was unseasonably warm for September in the Rockies, but nonetheless they’d been set free in the mountains, able to do as they wished, away from the other seven billion inhabitants lurking upon the planet.

“I knew the area pretty well and it typically holds a lot of bulls,” said CJ. “But with the warmer air, they were pretty quiet.”

On the first morning, CJ called a spike so close to Lang that he could see the disappointment in the young bull’s eyes when a hot cow didn’t greet him. The second morning was silent and fruitless. The third morning was much the same, only hearing one bull way out in a burned basin now thick with yearling pines and locust - a still hunter’s virtual hell. Regardless, the duo having no other options, they decided to at least get eyes on the bugler.

For those unfamiliar with the ways of mountain air, there’s this thing called “thermals” that move from valley to peak and vice versa throughout the day. Judging thermals is much like reading wind - you always want to walk with it in your face. As morning turned to afternoon the thermals began falling back down the mountain, giving CJ and Lang an opportunity to make an uphill attempt at a stalk.

“We’d been relaxing, waiting on the thermal shift when a thunderstorm rolled in,” said CJ, “and I’ll be danged if that bull didn’t bugle to the clap of thunder. It was like turkey hunting!”

The other surprise was that the bull didn’t seem as far away either. CJ eased forward with the Eichler Elk decoy in his hand and Lang in his hip pocket. CJ’s first cow call got an instant response so they quickly cut the distance, making their way into a finger of unburned pines, before completely giving away their position and risk getting pinned down. Another call, another response. This time the bull was so close that they could hear the air in its chest as it inhaled.

The pair continued side hilling toward the bull, one eye on the ground watching each step and the other probing the thickness before them. Lang moved out in front of CJ and slightly uphill to free himself for a shot while CJ gripped the Eichler Elk and continued scanning for movement. Suddenly, Lang froze.

There were three cows and the old bull swinging slightly downhill looking for the source of CJ’s call. The bull took time to rub a few pine saplings and let out a few more bugles. The show was reaching its climax.

“I didn’t know what was about to happen,” said CJ. “I was just back there white-knuckling the decoy watching the elk and Lang. My biggest fear was that they might keep walking below us and then I’d be in between them and Lang.”

Lang was out in that no-man’s land spot where the finale of the day’s hunt would be dependent on how he performed in the spotlight. He eased his bow around trying to get setup. The cows saw him draw and the game seemed to be nearly up, but somehow Lang held back for what seemed like ages.

“I wasn’t sure if he could hold back much longer,” said CJ. As the thought left his mind, Lang released his arrow. The Drone broadhead by Wasp Archery found its mark and the bull lumbered off through the trees.

“That in itself is something to be proud of,” CJ said. “Facing and overcoming that type of pressure is the measure of a true hunter.”

The crash of his big body 70 yards downhill echoed back up the mountain and his last sigh let the hunters know that it was done. Let the work begin.

“Man, the journey out was not fun,” said CJ. “Luckily, he died on an old trail and that made it easy to break him down. And the cloud cover hung over us too which was good for keeping the meat cool. But the pack out was hell.”

The cloud cover also released its water upon them. The bottom fell out as they started out on one of two meat runs back to camp. It was Lang’s notion that the quickest route between two points is a straight line so that’s what they did - right back through the thickest part of the basin. If you’ve ever encountered a locust tree then you know it’s not of a friendly nature what with thorns capable of running clean through the hand of a full-grown man. Tired and wet, they persevered, making it back to camp only to turn around and do it one more time.

“On the second pack out, we chose option two, which was dropping down into this drainage ditch,” said CJ. “It wasn’t much better because we were climbing over these huge rocks. We got rained on, then hailed on, the rained on again. Plus the hike back was longer, much longer.”

The two can laugh about it now but those last few hundred yards to camp were some of the most brutal minutes of their hunting careers. Lang lugged meat with the thought horses ought to be involved. And as a joke, CJ had bought Lang the cheapest meat frame he could find. It broke immediately so they had to use a rope to tie down a hindquarter that kept shifting on Lang’s back like the dead weight it was.

Back in South Carolina you can bet those elk steaks are going to be the centerpiece of many a fine dinners. The bull’s antlers will likely become a wall ornament in Lang’s house. Each will serve as a reminder of the two points traveled - where miles of laughter, labor and the teeth-gritting determination to make it those final hundred yards back to camp make the return trip inevitable.