Elk season out west always seems to conjure images of reddish gold aspen leaves in September and bulls screaming out their love sick calls in the high county of the Rocky Mountains. For an elk hunter there is nothing better, and many a night is spent dreaming of that perfect set up where a huge unsuspecting 6 X 6 bull gets pulled to a mere 10 yards of the shooter by his buddy strategically set up calling behind him at 60 yards. I would like to tell you that that scenario is the norm when bowhunting elk with a bow, but for me its not. Although I have had a few amazing textbook set ups and interactions, where a bull came in on a string and I was able to get drawn back and make a lethal shot, most of the time the success has come from creativity and the ability to put myself in an ambush position to intercept the elk on their natural path regardless of whether its early or later in the season. 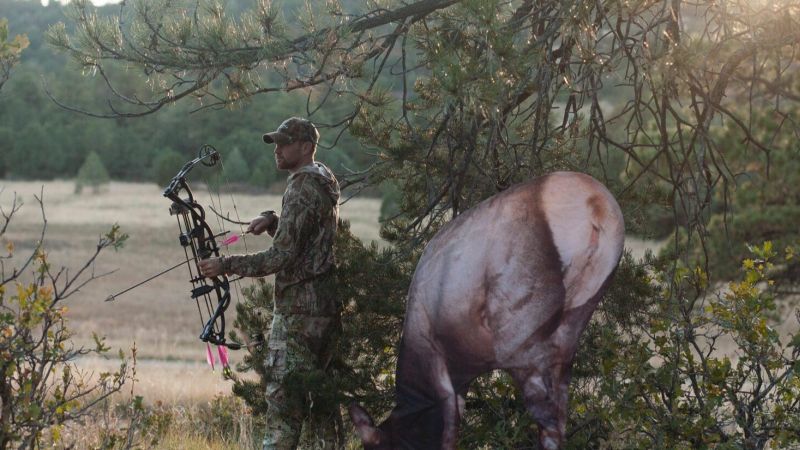 One tool I utilize from early season to later in the rut is a cow elk decoy from Montana Decoy, specifically the RMEF Cow elk or the Eichler Elk. These decoys work for me for a few reasons. The first is that it allows me to think out of the box. I like both of these decoys because they are compact and easily strapped to my pack for transport, and yet they expand to a large enough size that I can literally hide behind them and use them for cover.

Early season elk hunting can often times be hot and dry with little elk vocalization and elk movement can be limited, depending on the weather where you are hunting. I use the cow decoy to move through open country as I seek to close in on elk that are transitioning from feeding and moving into their bedding areas. Using an elk decoy in this early season ambush type, spot and stalk, sparse calling mish-mash of techniques can truly allow you to close the distance to within bow range, assuming that you are primarily paying attention to the thermals and the wind direction. Once you are in close to the elk, the chess match begins and you have to just hunt. This is where you have to read the situation. Perhaps sitting silently, being patient, and waiting on the elk to make the mistake is your best bet, or maybe a gentle “lost cow” call will bring the bull into bow range. 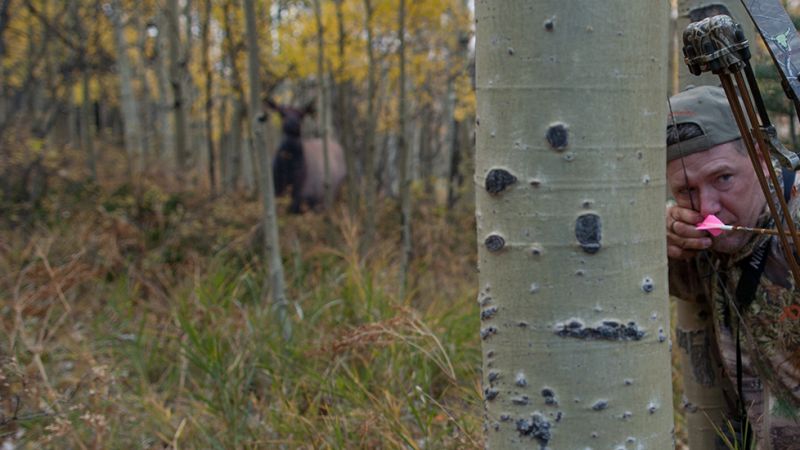 As the season rolls on and the urge to breed seems to surpass a bull elk’s vigilance to stay hidden, an elk hunter can then transition into a more aggressive strategy. If hunting solo, an archer can utilizing a modified “button hook” method that has been made popular by elk hunters who call and hunt in pairs. The idea is to create a scenario where a cow elk is lost or separated from the herd. A hunter can use the cow elk decoy to finalize the illusion by moving as close to the vocal herd as possible, presumably undetected and into the wind, and then set the decoy up on the edge of a small opening. This is where you want the bull elk to end up and by setting it near a small opening this allows the elk to have the visual cues necessary to facilitate the illusion. The hunter then does a short cow calling sequence and immediately, and as quietly as possible, moves forward towards the herd but a little off to the side. Just like a button hook route that a wide receiver might run in football. A bull will approach with his nose into the wind checking to pick up the scent of the lost cow or any danger lurking ahead and this is why it is so important for the hunter to set up a bit to the side allowing for a broad side shot as the bull closes the distance on the lonely cow and yet remain out of his scent cone. In this scenario, just like in most solo hunting scenarios, practice and a bit of luck come into play. But when it all comes together it is an amazing feeling to know that you have outwitted a wild animal on his own turf. I would also recommend that you have a list of good buddies that you can call to help with the pack out!

If you are fortunate to have a buddy along to help you “Tag Team” the calling, the difference in techniques is marginal. Rather than leaving the cow elk decoy stationary, as in the solo scenario, the caller will actually use movement of the decoy, along with his calls, to get the bulls attention as he brings him past a willing and ready partner with bow in hand. (On a side note we have found that by “flashing” the cow elk decoy every so often rather than constantly holding the decoy up and in sight of the bull really does a good job of portraying elk moving through the woods as they will disappear and reappear as they make their way through the vegetation.)

Regardless of when you are planning your hunt, being in the elk woods in late August through September is a magical time and using a creative mindset and a few helpful tactics with elk decoys can give you a couple more tools for your elk hunting tool box. Remember this important fact….. You can fool their eyes and you can fool their ears, but you will never fool their nose.